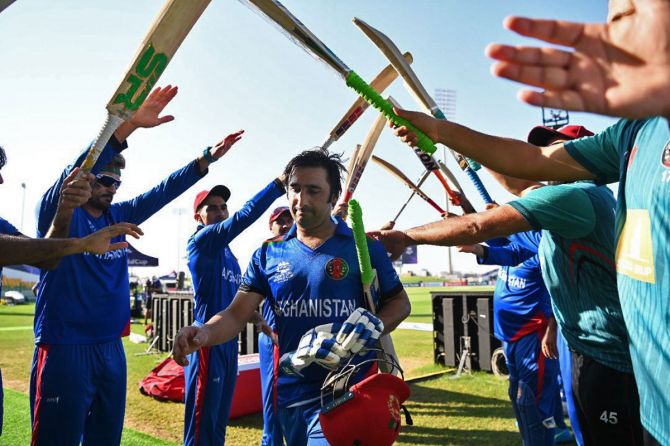 IMAGE: Asghar Afghan gets a guard of honour from his team-mates as he walks back after his dismissal, in his final match for Afghanistan. Photograph: ANI

Former Afghanistan captain Asghar Afghan received a guard of honour from Namibia’s players as he walked out to bat in his final match for the country, in the T20 World Cup game in Abu Dhabi on Sunday.

Afghan, who holds the record of most T20 Internationals wins as captain with 42 wins from 52 games, announced his decision to retire after the match against Namibia. His decision came after Afghanistan’s five-wicket loss against Pakistan in the Super 12 match of the T20 World Cup.

“In the last match, we were hurt too much, and that’s why I decided to retire,” Asghar, who has led Afghanistan in 115 matches, said wiping his tears during a chat after the end of the Afghanistan innings.

“There are plenty of memories, it’s difficult for me, but I have to retire,” added Afghanistan’s first Test captain. Afghan came into bat when Mohammad Shahzad’s entertaining knock of 45 came to an end in the 13th over. As he walked out to the middle, the Namibian players gave the former Afghanistan captain a guard of honour.

The 33-year-old played six Tests, 114 ODIs and 75 T20Is, including the Namibia match, in a creditable career, scoring 4246 runs across formats.

“I want to give chance to youngsters. I think this is a good opportunity for that. Most people are asking me why now but it’s something I cannot explain,” said Afghan, who scored a 23-ball 31 in his final innings, against Namibia on Sunday. 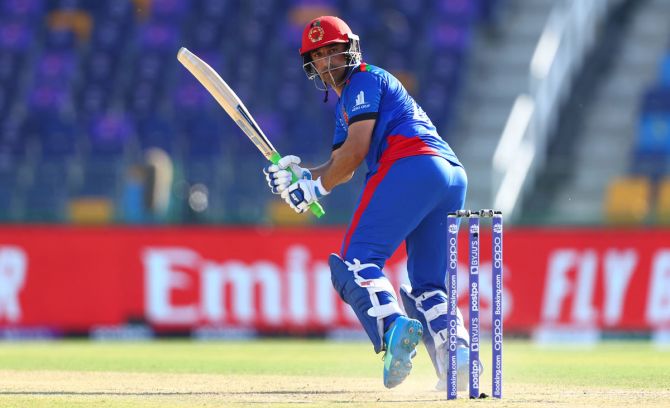 As he walked back after his dismissal, his teammates also gave him a guard of honour.